Polluted air is all around us,causing so many health concerns and making normal daily life a struggle for some. Smoke is one of the biggest factors when it comes to polluted air. From cigarette smoke to factories, it is all around us. Here is a list of just a few of the major health risks polluted air and smoke has on your health:

This is only to name a few, but as you can see, the risk that polluted air has to your health is major.

Luckily, you can get air purifiers that clean the air in your home and office. You will always have fresh breathable air. These purifiers remove up to 99.97% of pollution found in the air that includes pollen, dust, mold, spores, smoke and pet hair & dander. All of these contribute to allergies and health issues.

In this article, we are going to be looking at purifiers that not only remove these pollutants but also help to remove smoke and even the smell of smoke from the air.

These purifiers will work great in your office and your home. The four purifiers we are going to look at will help you to decide which one will suit your needs the best.

So let’s have a look at the products. 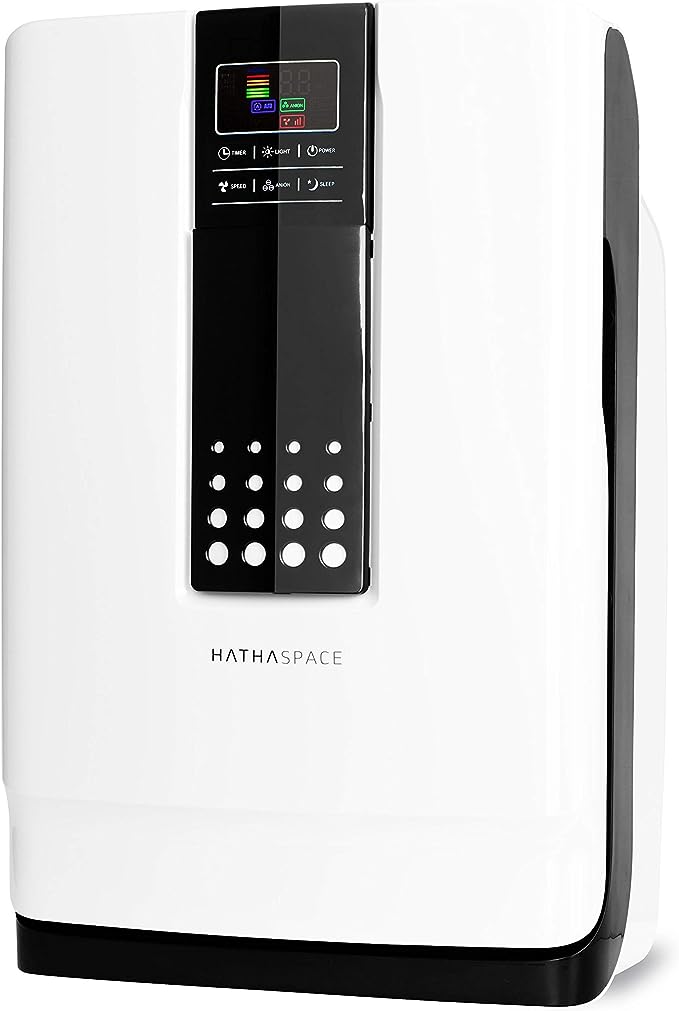 One of the best ways to protect your family from allergies and illnesses is to get an air purifier for your home. Or if you want to improve the air quality around the office it is also a great option to get an air purifier. Smoke is one of the biggest polluters, and it is all over us. It can really wreak havoc on your body, irritating your eyes and causing coughing and sneezing.

Luckily, this air purifier will remove smoke and the smell of smoke from the air as it goes through the whole filtration system. Leaving you with fresh, clean breathable air, that is so much better for your health.

This purifier has a sensor that monitors the air quality automatically and as soon as it senses that the air is becoming more polluted it switches to high functioning mode. The fan will run at a faster speed, cleaning the air quicker. When the air quality is as it should be, the fan will return to running slower. Not only does it remove the particles but also the smell of whatever it was that polluted the air. 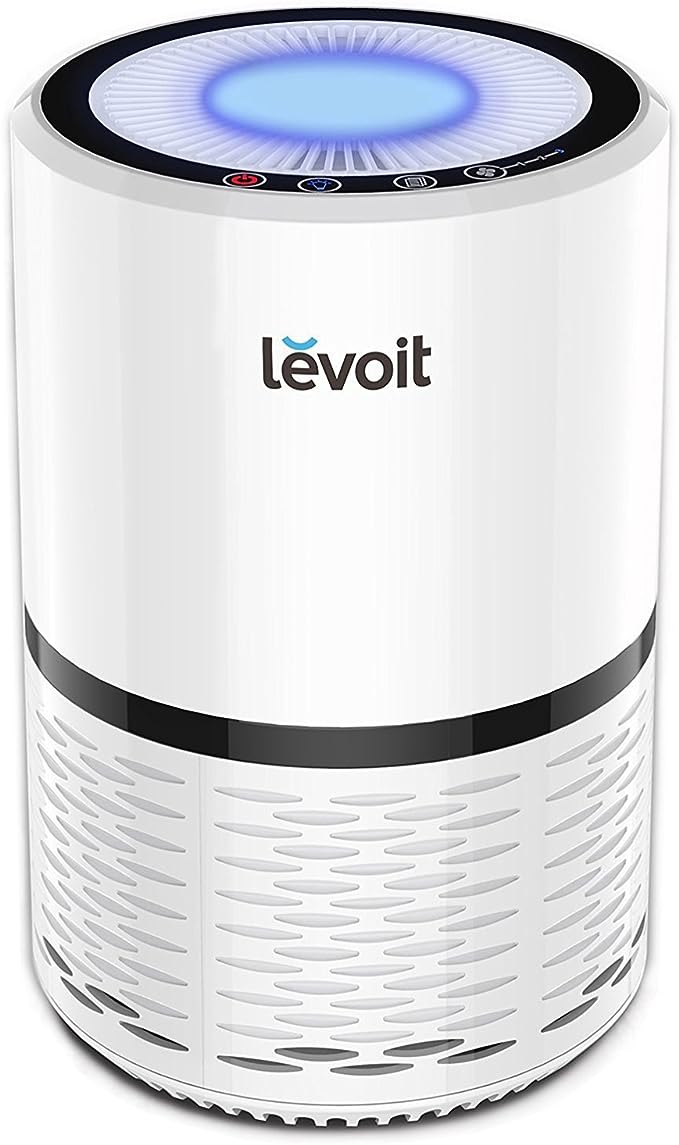 This air purifier is a bit on the smaller size making it very easy to move around the house and use where you need it. The Levoit is perfect for family use and is great for anyone who suffers from asthma. The three stage filtration system captures mold, smoke, dust particles, and allergens. It removes up to 99.97% of airborne contaminants.

The air purifier is ultra-silent so it is perfect to use in your bedroom, as you won’t have an annoying sound that might bother you. It is also great to use in your child’s room as it has a nightlight feature with two brightness settings. So you can set the perfect brightness for your child.

You have also 3 speed options for the fan, the faster it runs, the quicker the air gets purified. The purifier also has a smart filter reminder that will notify you when it is time to change the filters. These filters not only remove the particles in the air but also remove the odors that might be in the air. So the smell of smoke for example will be removed, leaving you with fresh smelling air. 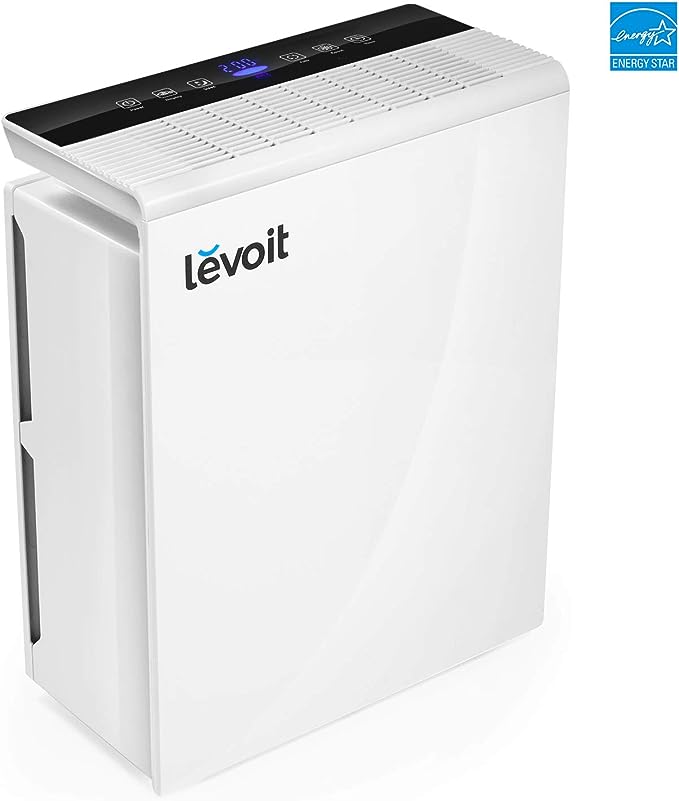 This air purifier is great if you or someone in your household really struggles with allergic reactions. It is a great asset if you want to get rid of smells and odors in your house whether from cooking food or cigarette smoke. But not only does it get rid of smells and odors, it also removes particles in the air that can cause allergies and asthma.

The filter system removes 99.97% of germs, pollen, mold spores, and all sorts of stuff in the air that can be a risk to your health system. On the highest fan setting, the purifying speed is up to 30% faster than most other air purifiers available.

Not only does this purify the air, but it also sterilizes at the same time. It is able to do this thanks to the UV C light that is built into the purifier. This light is able to kill airborne viruses that can cause influenza, staph and the rhinovirus to only name a few. It works with titanium dioxide that reduces volatile organic compounds.

The three stage filter system removes up to 99.97% of particles that are in the air such as dust, pollen, pet hair, dander, and mold spores. The activated charcoal filter helps to reduce odors that might be caused by pets, smoke, and even cooking fumes. So you will have fresh breathable air in no time.

It also works great at night as the UV C light works as a night light as well, but you can turn it off should the light be bothersome. The purifier has five speed settings that you can choose from as well as a timer that can be set for up to eight hours. You will also be notified when it is due to change the filters, as it has an indicator light.

Clean, fresh air is something that is much appreciated and now easier to achieve in the comfort of your own home. These air purifiers are designed to remove 99.97% of particles that are drifting around in the air that can cause allergic reactions and even asthma for some.

But not only do they remove allergens, they also make the air smell clean and fresh, while removing odors that are in your house. Ranging from musty mold smells, cooking fumes and even cigarette smoke. All will be removed. Some can even kill airborne germs that can cause some serious illnesses.

Well, we hope that with this buyer’s guide you will see the value in purchasing an air purifier. If you are ready for clean fresh air and no smelly odors, then an air purifier is definitely the way to go.